A one day joint meeting of the Near Surface Geophysics and Forensic Geoscience Groups of the GSL - Date: 2/12/2020 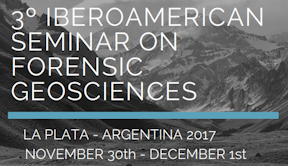 Held in conjunction with the Trace Evidence Working Group (TEWG) at the 9th Asian Forensic Sciences Network (AFSN) annual meeting and symposium in Singapore from 5 to 9th September 2017.

Download the workshop flyer, an field training flyer and/or a formal invitation from the Organizing Committee flyer for the Seminars organized as part of the Master in Forensic Geology.

download the workshop flyer, (in Italian) the field training flyer (in Italian) and the flyer for the Seminars organized as part of the Master in Forensic Geology (in Italian)

Second International Conference on Engineering Geophysics website Authors are invited to submit 4-page extended abstracts for selection by the technical committee no later than 15 June 2013.

At the Science, Significance, and Impact Conference, co-sponsored by the Office of Justice Programs’ National Institute of Justice (NIJ) and the Federal Bureau of Investigation (FBI) Laboratory Division. Click here for more information on the Trace Evidence Symposium 2011
For free live streaming of some of the events go to http://www.nfstc.org/trace-evidence-symposium-sessions-to-be-streamed-live-online/.
The soils session was scheduled for Wednesday morning, August 10th, 2011.