Veteran TV journalist Bill Neely, BA Modern History and English (1981) – who spent almost 25 years at ITN and had spells at NBC News and BBC Northern Ireland – is the 2021 Allstate NI Queen’s Graduate of the Year.

BA Modern History and English (1981) alumnus and broadcast journalist, Bill Neely, was named the 2021 Allstate NI Queen’s Graduate of the Year in recognition of his services to broadcast journalism. Bill was formerly Chief Global Correspondent for NBC News from 2014-2021, prior to which he worked at ITN (ITV News) for 25 years. During his illustrious career, he has won four coveted BAFTA awards and was twice nominated as Broadcasting Journalist of the Year, winning the award in 2011.

The annual award is presented by the Queen's Graduates' Association (QGA), with the support of Allstate NI to an ‘outstanding graduate, who has made a significant impact’. In July, the Student of the Year was revealed as Malaysian Law student, Yi Kang Choo, while earlier this month, Andy Wells, LLB (1974) received the Alumni Volunteer of the Year accolade.

“His illustrious career in television journalism has seen him break and share some of the most important stories of the last 30 years to a global audience. From his early work as a reporter for the BBC in Northern Ireland to his role as International Editor at ITN, and his most recent position as Chief Global Correspondent for NBC, he has received numerous accolades and awards for his coverage of stories ranging from the devastating 2009 Sichuan earthquake to the fall of the Berlin Wall and the death of Princess Diana.

“I am absolutely delighted to announce that the Allstate NI Queen’s Graduate of the Year is 1981 Modern History alumnus Bill Neely.”

Bill, who retired from NBC earlier this year, was Chief Global Correspondent for NBC News from 2014-2021, prior to which he worked at ITN (ITV News) for 25 years.

Described on social media by BBC North America editor Jon Sopel, as the ‘quintessential story teller’, Bill Neely has received eight Emmy nominations at NBC, including for work on the Brussels terror attacks (2016) and in the Best Interview category for his exclusive interview with Syria's President Assad.

Since early 2020 he has reported on the coronavirus crisis from Hong Kong, Italy, Sweden, Austria, London and Brazil. In all, he won 4 coveted BAFTA (British Academy of Film and Television Arts) awards:

He was twice nominated as Broadcasting Journalist of the Year by London Press Club, winning the award in 2011.

From Glengormley in County Antrim and a former student of St Malachy's College in Belfast, Bill Neely has been a broadcaster since 1981. Among key stories he has covered are: five US Presidential election campaigns; the crash of Concorde (2000); the killing of Osama bin Laden (2011); the Russian invasion of Crimea and the mystery of missing Malaysian plane MH370 (both in 2014) and the terrorist massacres in Paris (2015), Nice (2016) and Brussels (2016).

“As sponsors of the Graduate, Student and Alumni Volunteer of the Year awards, it is an honour for Allstate to be part of acknowledging the contribution made by the global network of Queen’s graduates and students.

“Bill’s career and achievements have been felt both on a local and global scale. The role that frontline journalism plays in helping us to understand the world is as important now as it was when Bill graduated from Queen’s, and his contribution to this medium sets him apart as a true icon.

“Congratulations Bill, from everyone at Allstate.”

Speaking about winning the Graduate of the Year Award Bill said:

“I’m so thrilled to win this Award and to join a long list of outstanding people who’ve been given this honour in the past.

“Queen’s was the foundation of a lifetime of learning, a love of words and the pursuit of facts in my 40 year career as a broadcast journalist and foreign correspondent.

“I’m immensely grateful to my teachers then for building me the platform from which I could make my way in the world.

“And I’m so grateful today for this Award.” 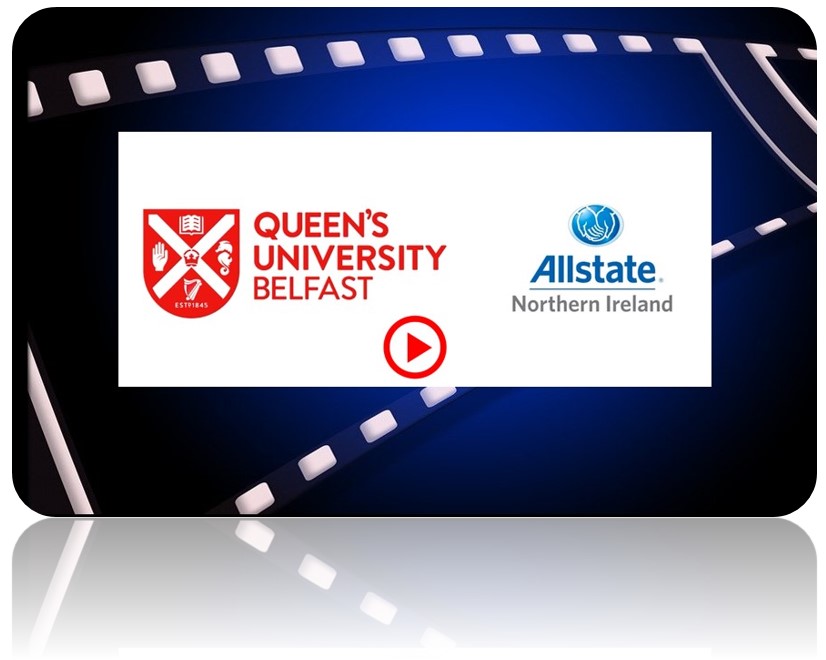 [Click on the image above or on this link https://youtu.be/JqeIfRbySG4 to watch a video clip of Bill Neely's acceptance speech]

Looking back on his time at University and the impact his degree had on his subsequent career, Bill added: “I’ve always felt that my degree at Queen’s set me up perfectly for a career in broadcast journalism that’s lasted 40 years.

“Once I became a foreign correspondent, all that studying, about Germany and Russia for example, was a store of knowledge to draw on when I covered the fall of the Berlin Wall in 1989 and the collapse of the Soviet Union not long after.

“I also did some acting at Queen’s, which helps when you're faced with having to present your reports on TV.”

Subject to Covid-19 restrictions, the presentation of the Graduate of the Year Award will take place at the Charter Day Dinner hosted by the QGA in the University’s Great Hall on Friday, 19 November 2021.